The art isn't the subject matter

One of my periodic philosophical musings. The following question was posted on Quora:

If you could be transported into any painting or drawing and got to interact with the world of the painting for one hour, which painting would you choose to visit?

My answer, which I reproduce below:

This is a very good question, because it neatly illustrates something that lots of people do not give much thought: there is a difference between a painting and the world that painting portrays. A work of art can be beautiful despite portraying something that isn’t; conversely, a bad piece of art can portray a beautiful world.

Consider, for example, this painting: 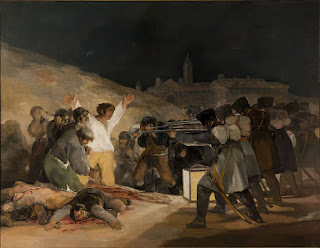 Francisco de Goya - The 3rd of May

It is pretty much universally considered a masterpiece. But who in his right mind would want to spend any time in the world it portrays?

Now at the risk of exposing myself to ridicule: when I read the question, the first thing that popped into my mind was “almost any of the the paintings of Thomas Kinkade.” Here’s an example: 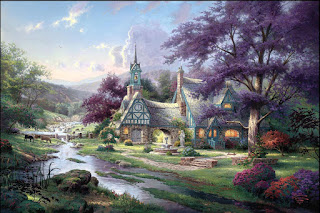 Most art critics consider his work utter kitsch. That may be so, but of course, the question wasn’t about which art was good. It asked about the world portrayed in the art. And whatever we may think of Kinkade’s art, how many of us, if given a choice between living in the world he painted and the one Goya painted, would choose the Goya?

The above was the answer I wrote on Quora, but I'll add a few thoughts below.

I stated above that many, perhaps most, people will not like a painting if they don't also like the subject matter. It occurs to me now that fine art painting is perhaps something of an unusual case when it comes to this. If you are one of those people who dislike the Goya painting because of its gruesome subject matter, ask yourself this: have you ever watched and enjoyed a horror movie, or a war movie, or a tearjerker? Have you ever listened to and enjoyed "sad" music? How about reading a sad story?

I have run into people who prefer their art to be every bit as anodyne as they would like their world to be: they watch nothing but light comedies, and will quickly change the station if they hear "sad" music on the radio. But they are few and far between - it seems most people actually understand that there is a difference between a work of art and what it portrays, and most of us seem to have a strange attraction to darkness, as long as it is in art rather than life. (Consider, for example, how gruesome and/or tragic many traditional fairy tales are, and how almost universally beloved they are.)

Now why would painting be an exception? I think it is perhaps simply because people conceive of a painting as something you hang on your sitting room wall. Not all that many people would put scenes from horror movies in their living space (though there are of course exceptions, particularly among male teenagers!)

Art is not life. It doesn't necessarily even tell us anything about life either. One might ask what the heck the point of it is then, but there seems to be very few people indeed whose lives would not be greatly impoverished if they were cut off from all forms of artistic expression, whether it be pictures, music, stories, movies or whatever else.