In the previous part of the project, I gathered together my fake parchment into quires; now they have to be prepared to receive text and decoration. The medieval scribes took page layout (manuscript experts prefer the French term mise-en-page) quite seriously and had various mathematical formulas with which they worked out how big the text area should be, where on the page it should go, what shape it should take and so on.

Looking at this example, we can see some common features of medieval page layout: 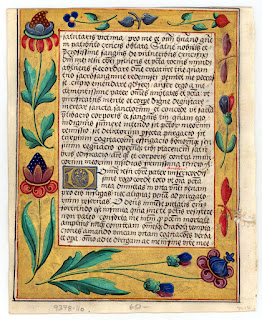 The text area is not placed symmetrically in the middle of the page, but is shifted upwards and to one side (which side will depend, to some extent, on whether we are looking at a left or right page). One still sees this even in many modern books. A reader usually golds a book at the bottom, so the upward shift facilitates reading. Viewed inside an actual book, this off-centre design can also be more aesthetically pleasing than a perfectly symmetrical one would have been.

Here is another example: 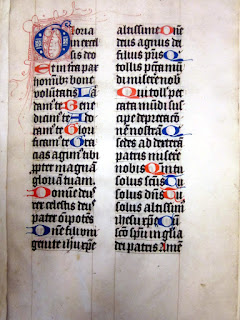 Here we can see that writing was often done in columns, in this case with remarkably few word per column. Apart from that, the page also displays the typical off-centre design. The border may or may not have been utilized for decorations.

For my own page design, I decided to try out a medieval scheme known as the "secret canon." It is in fact not so secret, and there is a Wikipedia page with information about it.

It works as follows. Two facing pages of the manuscript is placed in front of the scribe to form a rectangle: 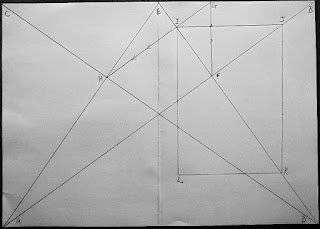 The diagonals of the rectangle (lines AB and CD) are drawn. Then the diagonals of the two individual pages, (AE and DE) are drawn in. The point F is where lines DE and AB cross, and from this point a vertical line is drawn to point G at the top of the page. From G, a line is drawn to point H, which is the point where the diagonals AE and CD cross. I is the point where the lines GH and DE cross, and this point is used as the starting point with which to construct the text area.

The text area on the facing page is a mirror image of the one constructed above.

I did the above construction on an A4 sheet of paper folded in half to form two size A5 pages. My fake manuscript will have the same dimensions. The design as constructed above was slightly awkward to work with because its lines do not fall on easily measured points on a ruler, so I slightly changed it for my own design, but it still looks very much the same.

I then added some ruled lines to write on, as well as a square space for a decorated initial of the sort often seen in medieval manuscripts. Finally, I wrote out a piece of my chosen text to see how it would fit onto the page. I chose Tennyson's poem The Lady of Shalott, the verses of which all consist of nine lines. I found that the first verse did not quite fit into the area; for my final manuscript I'll have to either make the text area a bit larger, or write smaller. For the moment, the design looks like this: 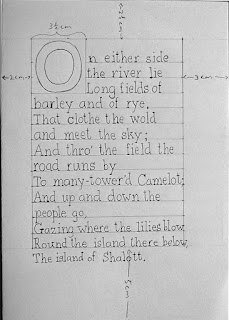 Because of the small size of my pages I decided to only work in a single column per page; I think doing it differently would be awkward and not look very good. My handwriting will also have to look a bit better! I have no knowledge of calligraphy, so I'll just use a normal handwriting, but try to make it as neat as possible. Having experimented a bit, it appears that using rather smaller letters than the ones I used above might look better, which will also solve the problem of the text not fitting into the area.

In the above example, my letters are placed on the lines in the manner we consider normal today. But during medieval times, depending on the time and place, scribes sometimes used their guide lines differently: the line could be used to indicate where the middle of the letter should be, or letters could be "hung from" the line.

On to my actual fake parchment. This brought up another aspect of medieval manuscripts, namely pricking and ruling. One can see evidence of this in many manuscripts from medieval times, such as this one: 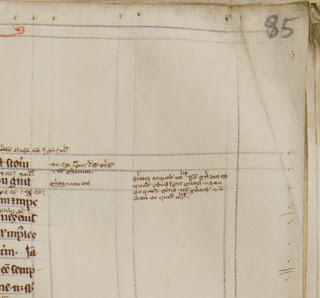 Medieval scribes used a sharp instrument like an awl or compass point to prick little holes into pages, which served to show proportions, and where lines for writing would be ruled. They then used various methods to draw these lines, two of which can be seen in this example: 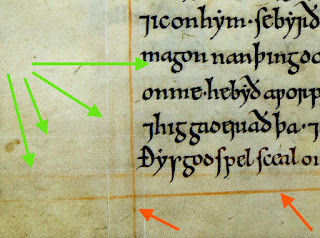 The green arrows point to indented lines scored into the parchment with a sharp instrument. The orange arrows show lines drawn with chalk. For my own manuscript I decided to just use pencil.

It is not clear to me why medieval scribes needed to prick holes in their parchment: if they had materials with which to make lines, like chalk or ink, then surely they could have used these materials to make dots instead of lines? I decided not to prick my manuscript full of holes and just used the point of a pencil to make appropriate marks, which indicate where pin pricks would have gone in a real manuscript.

And thus, two facing pages from my manuscript in progress: 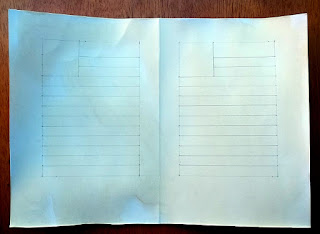 Other parts of this series of posts: