I have been trying my hand at making anthotypes - basically making prints using photosensitive chemicals from plants. An description of what it entails can be read in Wikipedia here:

And here are two articles describing how to do it in some detail:

For my first attempt, I used the purple berries of a privet bush (Ligustrum sp.). I mashed up a handful with a mortar and pestle, added a bit of water and methylated spirits to create a thin, watery paint (because the pulp was rather too dry to brush on its own) and then brushed two or three layers onto cartridge paper (letting layers dry before brushing on the next one). When the liquid dried it turned brownish.

I then put the paper onto a piece of Masonite, put a few leaves from a carob tree (Ceratonia siliqua) on top, and then covered it with a plastic transparency, and fastened the whole thing together with clips: 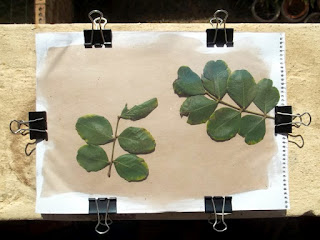 As you can see, the transparency did not work very well: instead of pressing the leaves flat against the paper, it buckled a bit, allowing sunshine to get partly under the leaves. I left the setup out in the sun for about five days, after which a clear print had formed on the paper: 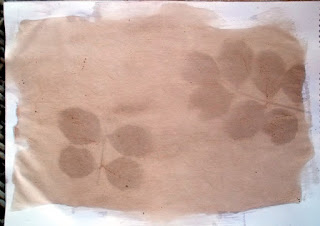 It looks rather out of focus for reasons explained above: the leaves did not press down firmly onto the paper, so as the sun shifted position through the days, its rays got in under the sides of the leaves, exposing bits of paper that should have remained in shade.

For my next attempt I got hold of a piece of plate glass, and I used three layers of cheap red wine as photosensitive pigment. For the rest I simply repeated the procedure as above: 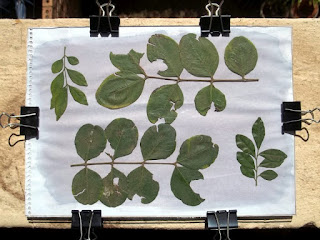 As you can see, the leaves were pressed down more firmly against the paper this time. I used carob leaves again, plus a few leaves from a garden shrub I can't identify. I once again left it in sunshine for about five days. This time round, the print came out more crisply and clearly: 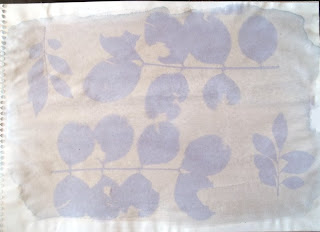 Perhaps not exactly great art or photography, but there is something rather magical about it.