It has been a while since I have had time to post anything here. Well, rather late than never. Here is a photo of the sun's light falling through water in a wine glass and in the process being broken up into a spectrum of its constituent wavelengths: 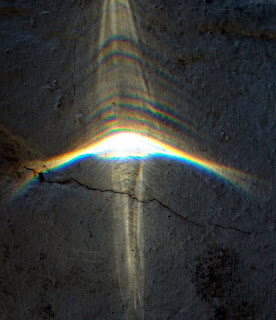 And here is a closeup of a part of the rainbow: 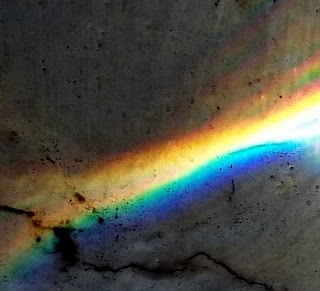 Finally, a photo of a "real" rainbow I took some weeks ago: 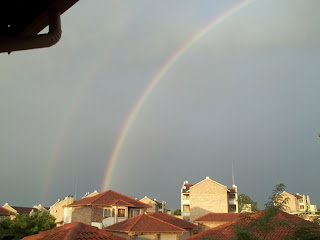 My simple point-and-shoot camera is not the best tool with which to capture the rich colours. All seven, er, six, er... how many colours are there in a rainbow anyway? At school, we are usually taught that there are seven. Precisely seven, no more and no less, and the clever kids, none of whom have ever taken the time to look - really look - at a rainbow, can even name them for you: red, orange, yellow, green, blue, indigo and violet. Or something like that. I can never quite remember, and I don't think I have ever seen more than six clearly defined colours in a rainbow. Because the colours smoothly flow into one another, one can perhaps see more than seven. Or, depending on your culture and language, fewer than six.

Next time you see a rainbow, take note of how many colours you see. You may be surprised.