In the previous part of this project, I worked on the page layout of my fake parchment. For the next part, the instructor wanted students to experiment with various aspects of writing, in preparation for writing the manuscript. In particular, three aspects of writing will be investigated, namely ductus, angle and weight.

1. With ductus is meant the number and direction of pen strokes, as well as the order in which they are made.There are four basic strokes that make up letters: vertical, horizontal, diagonal and curved. With modern ballpoint pens, we tend to forget about ductus, because with these pens, it often does not matter that much - they give a line of uniform appearance, irrespective of how the pen is pulled or pushed on the writing surface.

Individuals will nevertheless develop their own way of doing it. I seem to remember being taught this in primary school as well, though I can't be too sure, as my older brother taught me to read and write before I went to school, and so I never paid much attention in those classes! Nowadays, at least here in South Africa, many schools seem not to put much emphasis anymore on how a pen should be held and how the pen strokes should be made.

As noted above, with ballpoint pens it does not matter as much as with older writing implements such as fountain pens or dip pens, as we shall shortly see.

In the illustration below I indicate the ductus of some letters made with two different implements. The top line shows the basic strokes. In the second line, I indicate the direction and order in which strokes were made. This applies to my own handwriting, and will not be universal with all people.

In the third line I continued the analysis, this time comparing a ballpoint pen with a dip pen. With the ballpoint letters, one hardly needs to indicate ductus, because with a ballpoint the letters can really be formed with a single, continuous stroke. With a dip pen, on the other hand, you rapidly run into trouble if you try to use it in the same way as a ballpoint, because the dip pen nib cannot readily be pushed forward; all strokes must be made with a pulling motion. With the letters in ballpoint, I could use a single motion and just change direction, without having to lift the pen, whereas with the dip pen I had to make separate pen strokes, as indicated. 2. The writing angle refers to the angle at which a pen's nib is held with respect to the horizontal or vertical. As with ductus, in the case of a ballpoint pen it makes no difference, and indeed, because of the symmetrical shape of the ballpoint nib the term doesn't even make much sense when talking about writing done in ballpoint.

With dip pens of the sort used during the Middle Ages, it makes quite a difference, as can be seen in the diagram below. Changing the angle at which the nib is held creates quite different letter shapes. This is particularly noticeable when using  broad nib. With thinner nibs the difference is not so apparent. 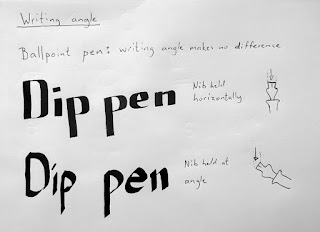 3. With weight is meant the difference in width between the thinnest and thickest strokes in a script. Scripts where there is no difference or the difference is small is referred to as light scripts, whereas script where the difference is big are considered to be heavy scripts. As can be seen in the diagram, the type of pen used makes a big difference. Ballpoint pens give an even and very light script. In cursive writing with a ballpoint, a slight heaviness can enter if, for example, less pressure is used on upstrokes than downstrokes (as is taught in some schools), so that downstrokes will be slightly broader. However, it hardly noticeable.

With dip pens with flat nibs, the writing is heavier the broader the nib, as can be clearly seen below, despite the fact that I have no experience in writing with these pens and am therefore not exactly skilled at it. 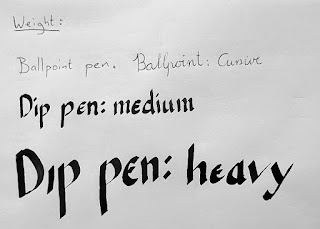 Only one thing remains before I can start to write my manuscript, and that is to choose a text to copy. I decided on Tennyson's poem The Lady of Shalott, which has a medieval theme even though it doesn't date from medieval times. I am going to attempt to copy out and illuminate the entire poem. This will be a project for another post.

Previous posts in this series: