The second installment of this project, which began here: A Medieval project (1). This week, I create quires out of the fake medieval parchment I made last week. Quires are simply bundles of folded parchment that have been stacked for binding; it is still done pretty much the same way today as it was in the Middle Ages. Here is a facsimile edition of the Codex Gigas, showing numerous quires bound together into a volume: 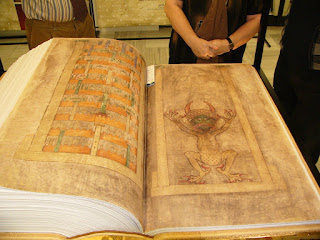 There were several ways of going about it, the simplest of which was to take sheets twice as large as the page size you want, and then folding them over: 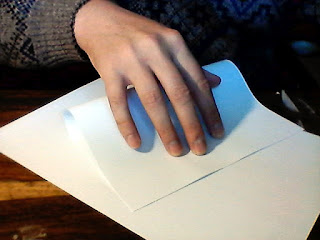 Several such folded sheets could then be stacked and bound together: 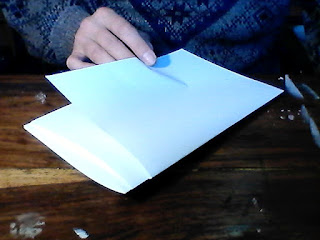 A somewhat more tricky procedure was to take a single large sheet and then fold it in half several times, to create a stack of sheets: 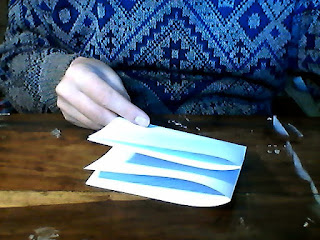 This procedure rapidly created a stack of sheets out of one large sheet, but it became necessary to carefully keep track of the order of the sheets and how they would be filled with writing. To do this one can simply number the pages in the order in which they are stacked here, making sure to indicate which part of the page would be on the top, so that pages don't end up being written upside down with respect to others from the same stack: 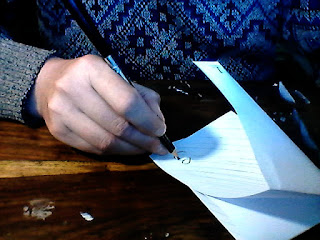 When I unfold the paper, one can see that the numbers that were on consecutive pages in the folded stack end up in rather counter-intuitive positions on the original sheet: 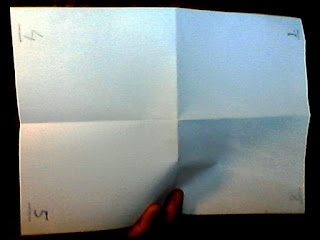 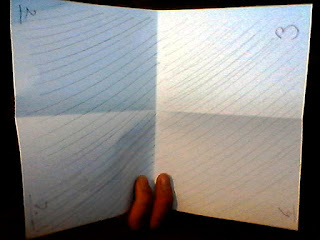 I have hatched this side in pencil to represent the darker, hair side of parchment. This is of some importance, because most medieval manuscripts follow what is known as Gregory's Rule or Gregory's Law, named after Caspar René Gregory (1846 - 1917), the American theologian who first noticed it: when you open a medieval codex anywhere, the two pages facing you will either both be lighter, flesh sides or darker, hair sides. This phenomenon needs to be kept in mind when making a fake codex.

Now if you create your pages by folding a single sheet repeatedly, and then keep them in that order, Gregory's Law is followed automatically. If, on the other hand, you create quires by folding sheets once and then stacking them, you have to keep in mind the rule and make sure you follow it.

The individual pages can now be cut along the folds in the paper to create a quire of sheets. It is not so obvious from this photo, but the sheets follow Gregory's Rule: 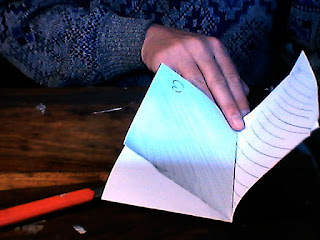 Lacking an assistant, I had to use one hand to take the pictures with my laptop's camera, and another to prop open the sheets, but I inserted a craft knife into the fold about to be cut.

Such a quire of sheets was usually tacked together to make sure they remained in order. The numbers on the pages of course also helps with this. Such numbers can be seen on some actual medieval manuscripts, though I found that this issue neatly illustrated the difficulties of doing any research, and even more, doing research on the web. For example, here is one page from a manuscript that I found online: 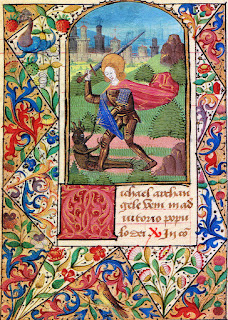 Saint Michael Battling a Demon, from a 15th Century Book of Hours

So was this page originally numbered? It is difficult to tell, because of the decorations all over it. But then I found another reproduction of the same page, showing that it actually had a clear margin: 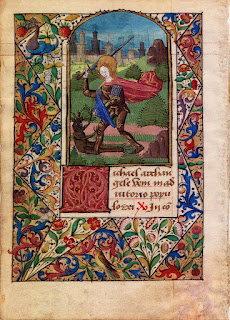 Plenty of room there for a number, though I don't see one here. Perhaps it was never numbered, or perhaps the number was later erased - one cannot really tell from a reproduction.

I did find some examples of pages that clearly have numbers/marks in the margin: 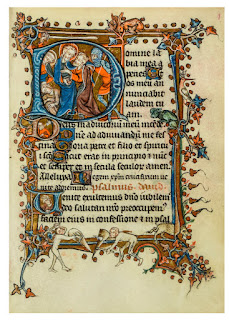 The Hours of the Cross in Latin, northeast France, 14th century, 24 leaves 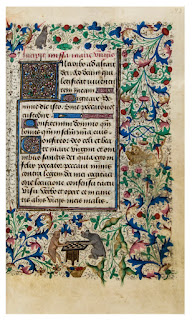 Book of Hours and other devotional texts in Latin and French Netherlands, circa 1460, 313 leaves

In both cases a number can be seen in the upper right corner, but I don't know if these were written there by the original scribes or added later; I'll take my instructor's word for it that such numbering systems were used.

And so, on to my own fake parchment that I prepared last week. I decided to first cut the original A3 sheets into A4 ones and then fold them over once to create A5-sized pages, and then stack them and simply check to make sure I follow Gregory's Rule. In the Middle Ages, folded sheets were sometimes written and illuminated before they were finally cut into pages, but I do not really have enough space to do it that way. Here are two quires, each made from an original A3 sheet cut and folded to form four A5 folios. It is perhaps not apparent from my rather grainy webcam photo, but they follow Gregory's Rule too: 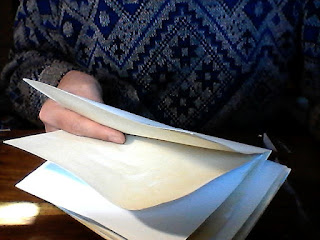 Because of the small number of pages that are going to be used for this project, I did not bother to tack the quires together; I don't think it will be difficult to keep track. Next week, I'll continue with process of turning them into a brief illuminated manuscript.

Other posts in this series: