I have been suffering through a monstrous bout of flu that left me unable (or at least rather unwilling) to do any "real" work. So instead I played around with Celtic knot design.

These decorations were often used in Medieval illuminated manuscripts (particularly in Ireland). They look very complex but can be constructed via a rather simple set of rules. Medieval Irish monks could routinely do ones vastly more intricate than this. 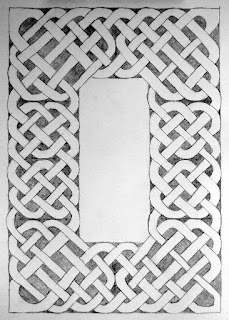