Somewhat on a whim, I have signed up for a course in medieval manuscripts through Coursera. Part of it entails making a faux illuminated manuscript, and I decided to show my progress here. As the thing progresses, I'll post updates - we're supposed to do a specific part of it every week.

The first part was to make fake parchment. The instructor suggested using large pieces of cardboard, like the ones used for school project posters, and then staining them to look like old parchment.

I couldn't get hold of poster-sized cardboard and used A3-sized (297 x 420 mm) ones instead. They were perhaps a bit too white (the instructor suggested yellowish ones) but once again, I could not get hold of boards in such a colour. It won't matter much, because perusing reproductions of real medieval manuscripts on the web, I noticed that some of them are quite white in colour, and the staining will create the right sort of colour anyway. See, for example, this 15th century manuscript - despite its age, it is virtually as white as modern paper (click on the images to see larger versions): 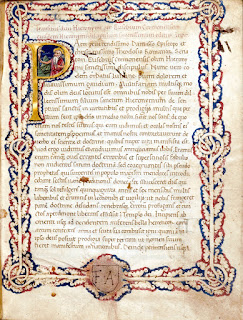 The same thing is true of this 10th century manuscript: 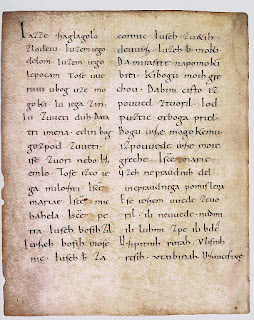 Medieval parchment was made from animal skins, and the hair side would typically be somewhat darker. Thus, the instructor suggested that we stain one side of the cardboard a bit darker. This can be done by using common instant coffee, adding a bit of vinegar, which apparently helps to prevent mold: 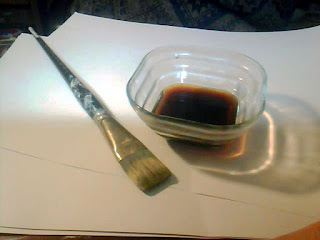 Using a large brush, I generously spread the liquid around on the cardboard, making no attempt to lay down a smooth wash; irregularities in the tone will create a more authentic-looking effect, I think. 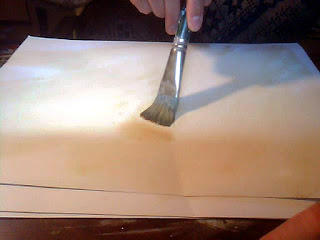 What one does see in parchment though, that is not found in cardboard, are such imperfections as follicle marks where there was hair on the skin, veins and sometimes small holes. For example, on this detail one can clearly see the follicle marks (they show as large numbers of small dots) and also that they are often spread in an irregular manner in patches: 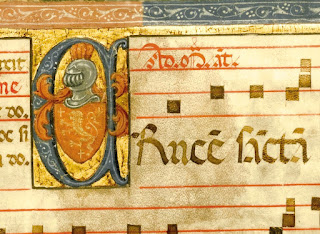 The above is in fact a 19th century forgery, but the forger used a piece of 14th century parchment, and it illustrates the effect well enough. Here is another example: 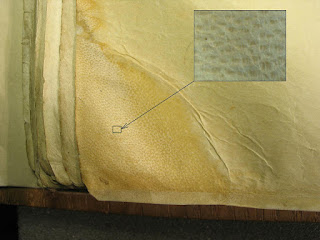 From the same document, a detail illustrating veining:

I used a sharp pencil to create fields of stippling, to simulate the effect of follicles: 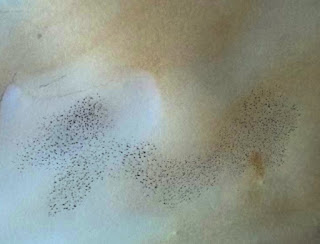 And on the opposite, "flesh" side, I created some veining with the pencil: 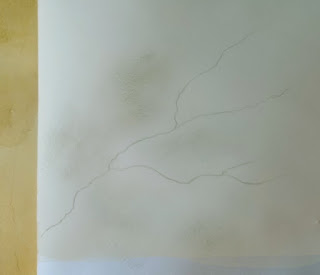 I did not want to overdo either, because looking around on the web, I noticed that one actually does not see these effects all that often in manuscripts. The Medieval craftsmen went to some lengths to eliminate it.

The same goes for holes sometimes seen in manuscript parchment: I decided to hold off on this for the moment, but created a hole on a separate piece of paper, using sunlight and a magnifying glass to burn a hole in the paper - I think it looks more authentic than one cut with a craft knife would have. I might add such a hole or two in my document in due course. 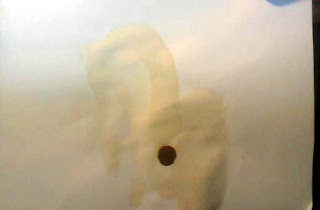 That then concludes my attempt at creating fake parchment. I will continue the project next week (or earlier, if I have time!)

Part 3: Preparing the page for writing